Concerns surrounding the structure of the NHS and quango structures such as Public Health England.

Do we need a new National Medical Health Care structure not a continuation of what exists: we continue to pour money into the NHS structure with little comparative increases in performance?

Can we continue with what we have? Or is it at least time to have an open (and honest) debate about our national medical and care provision. Is it now time to step back and be constructively critical without the anchor-sheet of emotional attachment to 1948 and ‘all that’?

In order to begin this debate , I examine below comparative performance from the most recent research including tables and charts.

In a report on the BBC in May 2018 , a series of charts were used to illustrate both the size ( and growing) NHS and its key targets. For the purpose of this discussion, I set out below the eight charts:

The following charts are derived from the BBC website (1). What these charts from 2018 illustrate is that we now spend more on the NHS than ever. In the financial year 2017-2018 , the UK spent £140 billion on health , more than 10 times that when the NHS was first established in 1948 .Importantly , these charts show real terms growth after adjusting for inflation. 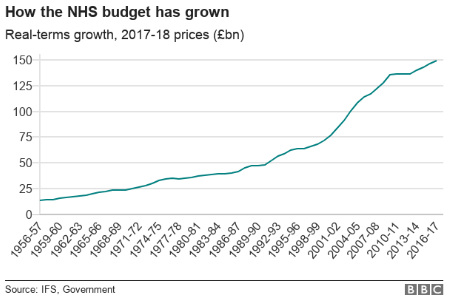 These charts seem to illustrate that no matter how much is invested in the NHS , it is still not enough. The structure does not unfortunately seem able to cope with the demands of the 21st . 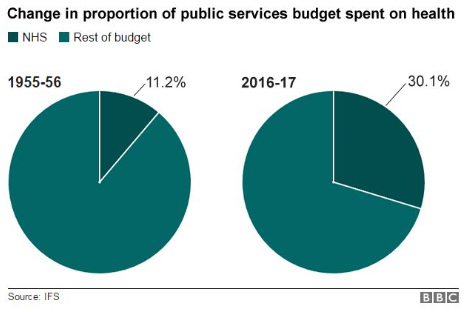 It is now also the case that key, And E targets are being missed ( the 4-hour waiting time) although it does not indicate the quality of health care provided: there is a difference and statistics can be misleading. 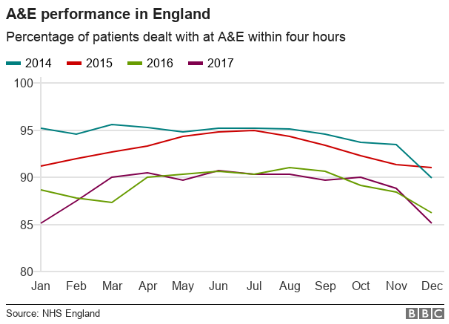 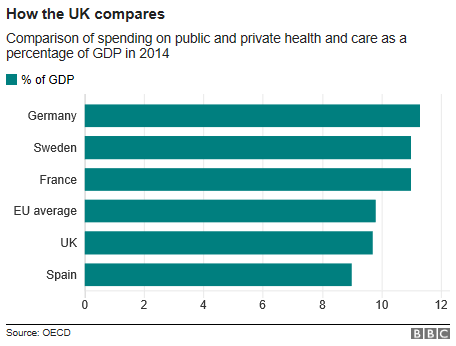 The comparison illustrates how there are fewer beds , doctors and nurses per patient in the UK . But other countries tax more. According to the BBC in 2018 , some 53% (Ipsos/Mori/poll) would back an increase in National Insurance but the breakdown seems to show that public opinion is and remains divided on the matter.

In 2019,The BMJ produced an interesting report which appeared to underpin the BBC research (2)It showed that the UK spent the least on Health care in 2017 compared with all other countries with spending growing at a smaller rate.

Its conclusion was quite stark. While the NHS showed good performance , including health service outcomes , its spending, patient safety and population health were all below average at best. Taken together the report suggests, that if the NHS wants to achieve comparable health outcomes at a time of growing demographic pressure it may need to increase the supply of labour and long-term care and reduce the decline in social spending to match levels of comparator countries.

I provide the following charts from the BMJ journal as a point of reference to the 2018 BBC report.

Table 1
Healthcare coverage and population statistics for UK and comparator countries, 2017 and change from 2010

The above chart illustrates the proportion of foreign trained doctors as a percentage of total doctors in the UK in 2017.

On its 72nd birthday one can only but admire much that has been achieved by the NHS. Its work during the Covid19 pandemic has been admirable with professionalism of our doctors and nurses an example to us all.

Nevertheless, we cannot shy away from the story of the data illustrated above and our need to re-examine the ‘fitness’ of purpose of a 1948 structure for the 21st century. It is a debate that requires a recognition that reform is both essential and an immediate goal. It is not and should not be an untouchable subject for discussion: the emotional attachment has to a large degree got in the way of understanding what is needed for our citizens , both now and in the future.

It cannot be right that comparator nations perform considerably above that of our NHS yet for emotional reasons, serious discussion regarding reform remains mired in political discourse and unnecessary rhetoric.

The role and place of Private medical healthcare within European systems is not seen as a competitor to state provision but a key prop of the whole Health and Care structure. We have a lot to learn from the ‘mix and match’ European structures : not all of it is good but it would appear to be better than what we have. Private medical healthcare insurance is surely a fundamental ‘cog’ in the UK wide wheel after all, most European systems require more taxation to sustain their structures: something which the opinion polls in this country show splits views.